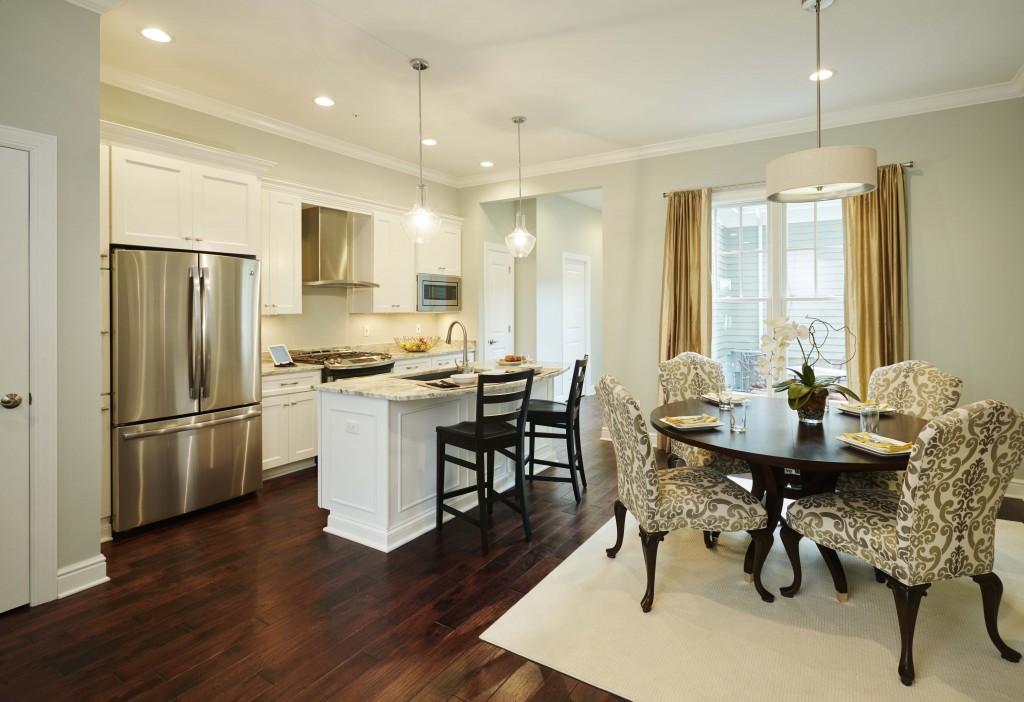 We can all picture a perfect looking room in our minds, but it takes unique skill to translate that vision into reality, especially if it’s someone else’s.

Interior designer Tonia Todd has the skill for turning clients dreams into reality, she has created designs for clients ranging from Pine Corp to private homes to Summerset at Frick Park’s development. Having worked in the design industry for 15 years, Tonia brings a clean, contemporary style and years of experience to every project, making each space looking picture perfect.

Her path to interior design began early. “Ever since I was little, I always looked at floor plans and studied photographs of beautiful spaces. It was just calling me to become a designer,” she remembers from her youth, “I always had that artistic skill.” During her time at Indiana University of Pennsylvania, Tonia first studied education, but felt that it wasn’t for her. She soon discovered the College of Interior Design and instantly fell in love, “from the moment I started doing it.” The design field allowed her to use her natural creativity as well as make a fulfilling, lifelong career. While at IUP, Tonia made sure her education was well rounded, “I studied sculpture and woodworking and photography in college.”

After graduating from IUP, Tonia began working with Ethan Allen and has been with the company ever since. She has seen the interior design field develop from a niche skill to a highly in demand necessity. She sees interior design trending towards more sustainable practices, “it’s about how products are getting made and where you’re getting them from as well.”

Tonia notes that some of her clients are not only aware of sustainable design practices, but also want those practices built in from the beginning of a project, “People want things that last longer and are better for the environment.”

Another trend that Tonia observes is homebuyers moving back into city centers. Developments like Summerset at Frick Park are attracting many different homebuyers; parents who just became “empty-nesters” and older couples who want to walk more and have more amenities closer – she currently has a client she is working with who is moving into the development. Tonia was kind enough to do the design of Summerset’s decorated Parkview model townhome. When asked about her favorite parts of the Parkview style townhome, without pause, she stated the kitchen, the small but spacious floor plan, and the proximity to the city.

Tonia Todd is an interior designer with Ethan Allen, located in the Waterfront. To make an appointment with her, email TTodd@homestead.ethanallen.com or call 412-462-3547 ext. 235. To schedule a tour of our decorated townhome, contact Melissa Reich at reich@rubinoffcompany.com or call 412-215-8056.

Our city has grown up. Pittsburgh has learned to take land with tremendous potential and change it into property that’s home to a prized neighborhood, Summerset at Frick Park.

In addition to winning awards from the Society of Engineers and the Society of Landscape Architects, Summerset at Frick Park has gained the attention of the press. Pittsburgh Post-Gazette reporter Rosa Colucci toured our decorated townhome and shared the story of Summerset’s development from un-utilized land to luxury homes. The article mentions all the amenities of the Parkview townhomes, but also speaks to the monumental undertaking that Summerset was, pointing out that the project was the biggest residential development since World War 2.

Ms. Colucci details the splendid views of the Mon river, seen from the third floor master suite. She goes on to talk about the spacious great room that looks out onto a growing green space, with large windows and open floor plan. The great room leads into a kitchen and dining area, with brand new, state of the art stainless appliances and marble counter tops. Ms. Colucci also notes the second floor and the ideal space for families, with Jack-and-Jill connecting baths and spacious bedrooms with walk-in closets, No more fighting over hanging space between kids.

Ms. Colucci also took time to speak with our builders from Montgomery & Rust to get a better understanding of what makes the home so special. “We can open walls, move doors. Some people like a separate kitchen. We are a custom home builder so there is a lot of flexibility,” Mr. Rust noted about the Parkview Townhomes, talking about how personalization comes with each space.

Our city is still growing up, from the turbulent era after the steel industry’s collapse to the new silicon valley that brings Pittsburghers back home.

You can find the article here

The Coalition’s goal was, and still is, to preserve the neighborhood of Squirrel Hill and to develop the community into an inclusive, thriving community. The preservation of Squirrel Hill began out of a concern about the future of the neighborhood, seeing citizens move from inside the city to the suburbs, and through the 80’s and 90’s the Jewish Federation of Greater Pittsburgh and it’s many Jewish partners invested $60 million dollars to keep institutions like the JCC and the Weinberg Terrace for Seniors in Squirrel Hill and to purchase a parochial school and convert it into the Community Day School. With that investment, Squirrel Hill kept it’s community whole, and in the 1980’s began a master plan for future development in the neighborhood. The plan called for a lot of urban development, including Summerset at Frick Park.

The president of SHUC, Raymond Baum, describes Summerset as the crowning jewel of plan; “There was a lot of pressure to turn the slag dump into something else, like a strip mall or some commercial thing, and the fact that we had a strong mayor (Tom Murphy), a strong councilman (Bob O’Connor), and strong developers with community support, it became the great success that Summerset is.” Mr. Baum has been and continues to be an integral part of the SHUC, he’s worked with the Coalition for 12 years and has been president for 5, and has supported Summerset from the beginning. Part of his job as president is to help guide the group in its decision making but he describes it more as a passive role; “I’m more a traffic cop than anything else. We’ve got 50 to 60 volunteers who are high quality, highly motivated, really knowledgeable people who do all sorts of stuff.”

The Coalition works tirelessly to make sure that Squirrel Hill remains a treasured community within the city, the group’s next challenge is the redevelopment of Forward Avenue and Murray, helping businesses, property owners and homeowners work with the city. SHUC worked with graduate students in Carnegie Mellon’s Architecture school to develop forward-thinking, sustainable designs for the lower end of Squirrel Hill’s business district. While the initial designs were ambitious, the students were able to work with residents to fully understand the needs of the community. The Urban Redevelopment Authority has declared the area an “Urban Redevelopment Area,” signaling the next chapter in Squirrel Hill’s story.

Summerset at Frick Park is proud to a part of the neighborhood of Squirrel Hill and congratulates all the honorees, Bill Isler, David Stock, Mike Chen, and The Taylor Allderdice High School, all of whom have lent their talents to the community. The Squirrel Hill Treasures Dinner is October 22, 2015, and begins at 6 pm at the Pittsburgh Golf Club. Tickets are $90 per person with a buffet dinner and complimentary valet parking. Reservations can be made at here

The Perks of Townhome Living

Maybe you’ve been weighing the pros and cons of buying a townhome versus a single­ family home or condo. Look no further — our townhomes are versatile and fantastic for a variety of people — a young family, an older couple who might appreciate a first­-floor master suite, or maybe just a young urban professional who wants the extra space. Designed with your lifestyle in mind, our spacious homes offer the best in townhome living. Summerset at Frick Park is just minutes from downtown, next door to the health care and education hub of Oakland, and a short drive to the technology and startup boom of East Liberty. We take pride in being Pittsburgh’s finest traditional neighborhood in a convenient city setting nestled between the main streets of Regent Square and Squirrell Hill and the big national retailers in The Waterfront. 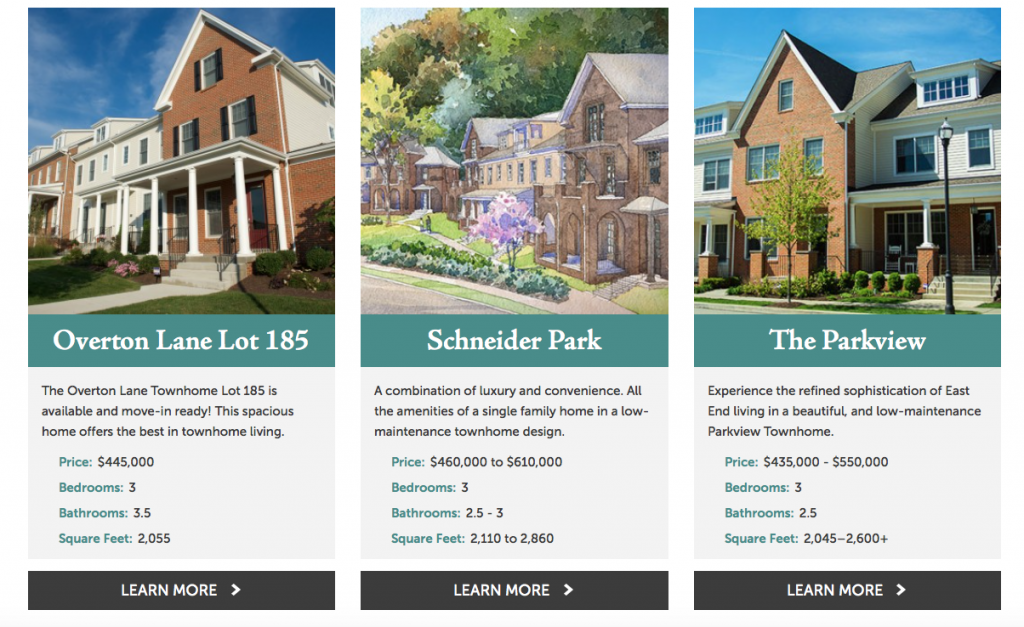 There are real benefits with choosing to buy a townhome over a single-family home or a condo– and it’s not just because our townhomes are a pretty perfect combination of luxury and convenience that offer all of the amenities and square footage of a single-family home but in a low-maintenance hassle-free townhome design. One perk to townhomes over apartments and condos is that they have their own entrances and exits, and in many cases you get an attached garage. Another benefit is that there’s no one above or below you, just one shared wall between units. Plus all of our townhomes feature covered front porches, private outdoor spaces and professional landscaping and maintenance.

For more information on available homes and tours, contact Melissa Reich at 412-215-8056 or at reich@rubinoffcompany.com