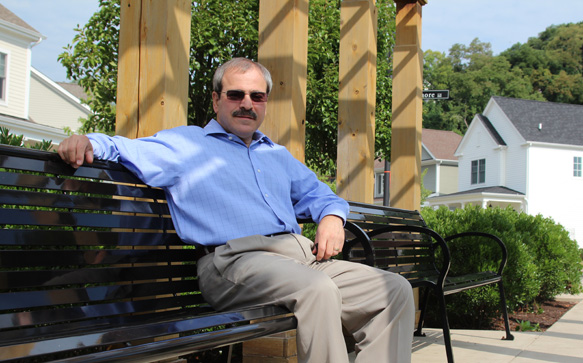 The entrance to Summerset at Frick Park is flanked by beautiful stone walls and lush trees. Right away, you are aware that you are somewhere special. As you travel the main road through the neighborhood, Parkview Boulevard, you can’t help but notice the wonderful view of Pittsburgh. It prompts you to slow down a bit and take in the vast view of the Monongahela Valley. All of this is by design.

Summerset at Frick Park started off as a blank slate, albeit with some challenging topography. Landscape architects, master planners and urban designers, LaQuatra Bonci, along with Urban Design Associates, made it their mission to design a new urban neighborhood that had the allure of old established Pittsburgh neighborhoods, while utilizing new approaches to urban design that would stand the test of time.

Jack LaQuatra, a founder and principal of LaQuatra and Bonci, explained that some of the features of Summerset at Frick were designed to be reminiscent of some of the most beloved features of Pittsburgh. Parkview Boulevard was designed as The Grandview Avenue of the neighborhood, with stately homes and wonderful views. The Pavilion at Crescent Park is an inviting place to gather and relax, similar to the buildings and shelters of nearby Frick Park. LaQuatra Bonci had worked on the Master Plan for the Pittsburgh’s four parks previously, and continues to do so with the Park Conservancy. They brought this experience and know-how to this project by creating Crescent Park as a neighborhood gathering place and McLean Park, as a smaller more Zen-like, quieter park. These parks, along with Parkview Blvd and the park-like entrance were designed and placed so that all homes would be near one of these features and could be enjoyed by all who lived and visited here. “We wanted to create places for people to enjoy throughout the neighborhood.” LaQuatra explains.

The green space in this neighborhood was not just the left over land used to satisfy open space requirements required by zoning. It was very much a part of the overall plan. Most traditional builders and planners try to build as many homes into an area as they can, but LaQuatra Bonci felt that well-placed and generous green space would greatly benefit the overall feel of the neighborhood and quality of the project. The neighborhood’s amenities, such as these green spaces, were the “intrinsic things that were built into the plan.” LaQuatra notes.

While the design of Summerset at Frick Park is a nod to the older established neighborhoods and city attractions, LaQuatra and Bonci also utilized newer ideas in urban planning to make the neighborhood more pedestrian friendly and encourage a closer knit neighborhood, where children would go out to play with other kids in the neighborhood and people would be inclined to enjoy evening strolls. Traffic circles and even the width of the street were carefully calculated to slow traffic through the neighborhood. The streets were designed with alley ways behind them so all the homes face forward on the streets and no one has to look at the neighbor’s back door or garage from their front porch. This design also encourages neighbors to be on their front porches and interact with neighbors.

Most people expected that Summerset at Frick Park would be well-received, but it has exceeded all expectations. “It was the largest new development in the city since the war.” LaQuatra explains, “There was pent up demand for new product in the city.” Summerset provided just what buyers were looking for. It offered a unique, well-planned, well-built, new traditional neighborhood within the city. “The effort that was made is really paying off in value. The development has actually brought in people, not only from around the country, but also suburban dwellers back to the city,” notes LaQuatra. He adds “It’s one of these things where you really can say, build it and they will come.” Of course, having a great community design didn’t hurt.

In the News: Summerset at Frick Park is featured in this issue of The University of Pittsburgh’s Pittsburgh Economics Quarterly. Click here to read the publication and more about this land reclamation project.

The Pool is Open! 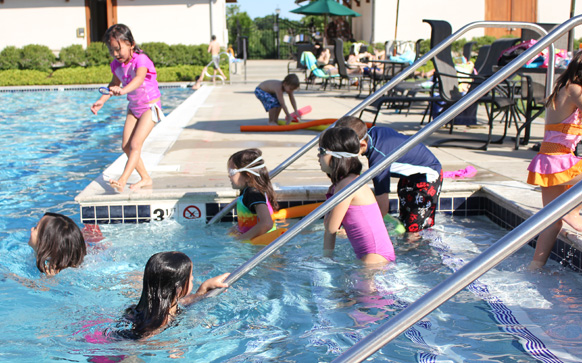 Nothing says SUMMER at Summerset at Frick Park like the Annual Pool Opening Party. This year’s party, held on May 18th, was no exception. Residents flocked to the pool to get in their first summertime dip. Grills were fired up for the barbecued ribs and residents brought plenty of food to share. Everyone enjoyed music, food and fun. The weather was perfect, allowing friends and neighbors a chance to swim, dine and enjoy a perfect summer evening together.

Summer is here! School is out. The pool is open and the grill covers are finally off! Summerset residents are eager to take advantage of all the outdoor amenities the community has to offer. Thanks to the beautiful patio areas, dining alfresco is a popular activity  for many Summerset at Frick Park residents. Equipped with a direct gas line that connects to the grill, it seems these homes were designed with just that in mind.

Whether it’s the standard hamburgers and hot dogs, or something that pushes the culinary envelope a bit more, it seems that just about everything tastes better over a searing flame. From grilled vegetables to pizza, the possibilities are endless.

Resident Jeff Stapinsky, who has been deemed the “Grill Master” by his fiancée, enjoys grilling year round. He shared the following recipe that puts a healthy and flavorful twist on the typical cheeseburger.

Ingredients:
1 lb of ground turkey
5 Babybel cheese rounds sliced down the center
1 chopped medium onion
4 chopped mushrooms
1 tbsp of salt
1 tbsp of pepper
1 tbsp of garlic
1 tbsp of aji merquen (this is a special spice from Chile; but Paprika will do)
1 egg

Prep:
Combine all of the ingredients, except for the cheese into a large bowl and mix. Form the patties with your hands, and push the cheese wheels into the center of the raw patties. (Makes about five to six burgers).

Cook:
Heat your grill to 500 degrees, and place the turkey burgers on the grill. Cook on each side for five minutes or until patties have turned a golden brown. Pull the patties off of the grill and refrigerate overnight. This will help to lock in all of the flavor. The next day, put the burgers back onto the grill, and cook them all the way through until you see the cheese beginning to bubble. When you cut the burger open or bite into the cheese will ooze out of it.

Not quite a grilling expert? Tom Petro of Monitor Street Catering, in Squirrel Hill, offers these fool proof tips to ensure your food comes out grilled to perfection each and every time. 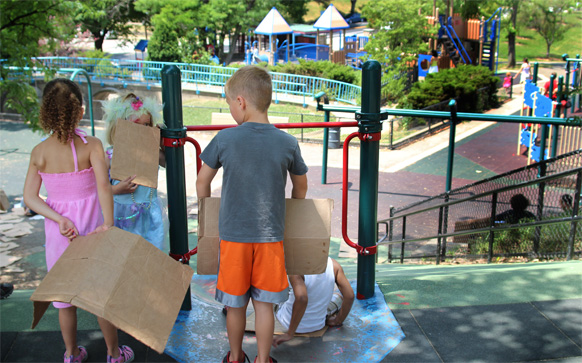 Summer brings with it longer days, warmer weather and more time spent outdoors. One of the best features of Summerset at Frick Park is its proximity to Frick Park. As a prime outdoor destination, it offers something for everyone, from a place to have a quiet picnic to a challenging course for a multi-terrain workout.

Children of all ages can play, explore, and let their imaginations run rampant at parks that go above and beyond when it comes to playground equipment. Nearby Blue Slide Park features a castle themed jungle gym, but is perhaps most renowned for the tall blue slide that it is named after. Daring children line up with cardboard piece in hand, ready to slide down from the tall hill that the slide is situated upon. For those who aren’t quite ready to brave the Blue Slide, nature themed Braddock playground offers a more tranquil setting. The concrete walkways leading into the park have been sandblasted with imprints of leaves. Further in, “Frick Creek” winds through the park past rock displays carved with native paintings.

About a half mile past Blue Slide Park on Riverview Trail is a dog park, where dogs can relinquish their leash, and are free to romp and socialize with other local dogs.

For the more athletically inclined, Frick Park features red clay tennis courts, and Pennsylvania’s only public bowling green. Additionally, there are seemingly endless miles of terrain ready to be traversed on foot or by bike. With different routes according to endurance level, it is the ideal destination for an invigorating workout that you just can’t get at the gym. At the entrance to Blue Slide Park, there is also an exercise circuit available, with balance beams, chin up bars and more.

Whether you are heading out with a destination in mind, or just want to get some fresh air, this summer, take a moment to explore all of the outdoor pleasures that lie just beyond your door step at Frick Park.

Make a Move to an Easier Lifestyle 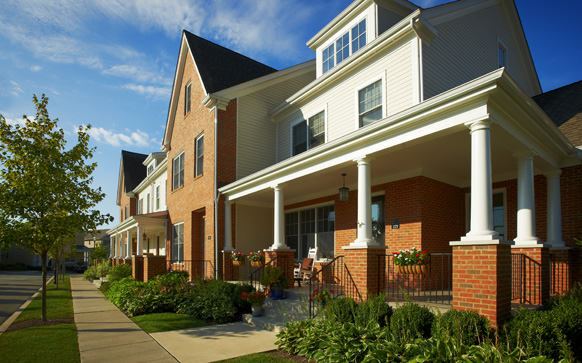 If you travel frequently, find that you are too busy for home maintenance, or simply don’t need all the space of a single family home, a Townhome or Manor Flat at Summerset may be the perfect fit. Both the Townhomes and the Manor Flats feature an open floor plan, high ceilings, large windows, private outdoor space and plenty of amenities designed for easy living.

Enjoy high-style and well designed living spaces at the Overton Townhomes. The two and three bedroom floor plans come with the option for a 3rd floor loft, in-law suite or upper level balcony. Add in a home gym, office, or an art studio to make your new home suit all of your needs. Prices start at $369,000.

The Manor Flats offer two bedroom plus a study room floor plans. Enjoy easy, spacious, one-floor living with the convenience of garage parking in an elevator accessible building. Entertain on your front balcony or covered terrace. Priced at $444,000.

Outdoor property maintenance and professional landscaping are included in the HOA fees meaning more time for the things you love. So give the lawnmower — and your back — a break, and enjoy carefree living, Summerset style! 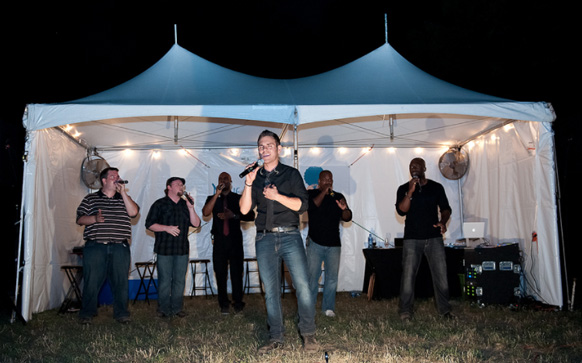 Nine Mile Run Watershed Association’s annual fundraiser, A Summer Storm, was another great success this year. More than 350 guests made this event a near sellout on Saturday, June 23 at 7 pm in Fern Hollow in Frick Park. Guest enjoyed a buffet dinner provided by local restaurants, sampled locally made beer and whiskey, took chances to win raffle items and enjoyed the sounds of Garden Gate and Double Shot. Summerset neighbors Mary Ellen and Mark Meyers provided guests with the Summer Storm cocktail made with their Wigle Whiskey, especially for this event. The food, drink and raffle items were all donated by local restaurants and businesses. Brian O’Neill of the Post Gazette was also on hand for the festivities. Councilman Bill Peduto stepped up to the mike to thanks Nine Mile Run, their sponsors and volunteers for their effort.

Steeltown Fire, closed the evening’s activities with fire dancing.  They performed for a captivated crowd with swinging flames and dance. To be on the lookout for next’s year’s event or learn more about the organization by visiting Nine Mile Run Watershed Association’s website: www. ninemilerun.org

Check out the pictures from the event: Summer Storm Soiree 2012